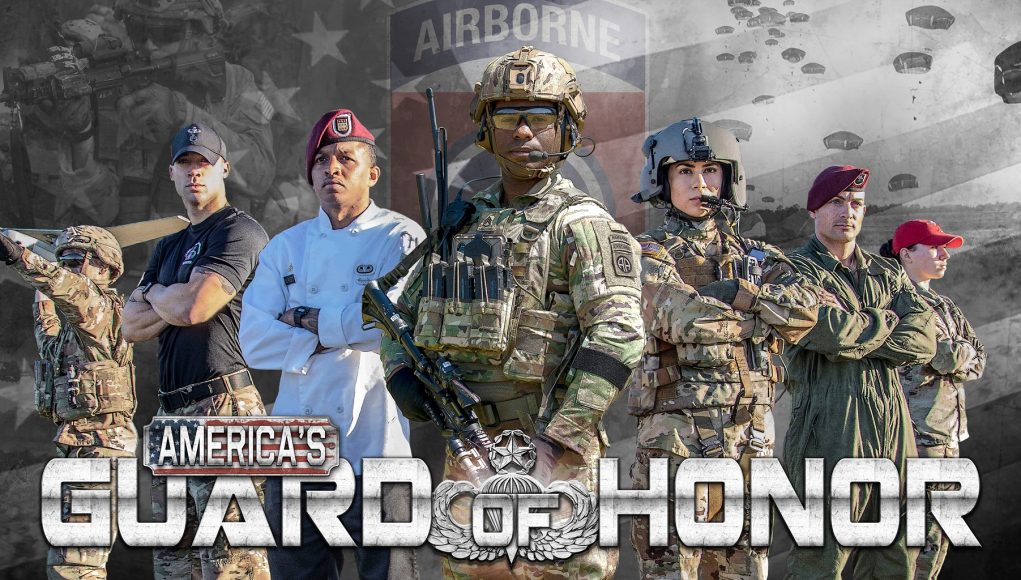 WASHINGTON — Soldiers from the 82nd and 101st airborne divisions along with troops from other units are among the roughly 8,500 service members who have been placed on heightened alert for possible deployment to Eastern Europe should NATO allies request help deterring Russia from invading Ukraine, the Pentagon said Thursday.

“These units, all told, include medical support, aviation support, logistics support, and of course, combat formations,” Kirby said. “These forces are on a heightened preparedness to deploy — they have not been activated.”

Defense Secretary Lloyd Austin ordered the units to be ready to deploy within five days should the alliance activate its NATO Response Force, Kirby said earlier this week.

“This will ensure … the United States would be in a position to rapidly deploy additional brigade combat teams, logistics, medical, aviation, intelligence, surveillance and reconnaissance, transportation and additional capabilities into Europe,” he has said.

The NATO Response Force consists of about 40,000 troops from multiple countries in the alliance, Kirby said. It includes land, air, sea and special operations forces “that the alliance can deploy on short notice, wherever needed.”

Pentagon officials announced Monday that troops were placed on alert without saying which units had been tapped for the mission. Kirby had said the Defense Department had to wait for all troops to be notified and allow time for them to inform their family members before announcing the units.

The announcement is a response to increasing tensions with Russia since the country began amassing more than 100,000 troops along its border with Ukraine last month. Russian forces are also flanking Ukraine’s “entire Belarus border” after sending its military to the country last week for what it claims are joint exercises, President Joe Biden said Tuesday.

American officials have said the U.S. supports Ukraine’s right to sovereignty but has no requirement to come to its aid without a NATO request should Russia invade the country. However, its commitments to NATO members in the region — such as Romania and Bulgaria — allow the U.S. to respond should their sovereignty and security be threatened, Biden has said.

The 18th Airborne Corps is considered “America’s contingency corps” and has a range of rapid-deploy forces specializing in forcible entry by air, land or sea, according to its website. These forces include the 101st and 82nd airborne divisions.

The 101st Airborne is noted for its expeditionary air-assault capability to conduct forcible entry “and other worldwide unified land operations in support of combatant commanders,” according to the Army. The 82nd Airborne also specializes in joint forcible entry operations and is capable of rapidly deploying within 18 hours of notification.

The 4th Infantry Division includes combat-ready expeditionary forces specialized in deploying with “joint, interagency, intergovernmental or multinational teams,” according to its website.

The U.S. also has not ruled out tapping into some its forces already in Europe to assist in challenging the Russians, Kirby said. Some of the units are “already on accelerated readiness posture” due to the nature of their capabilities and location, he said.

Monday’s heightened alert order applied only to the roughly 8,500 troops in the U.S., though Kirby said Air Force Gen. Tod Wolters, the commander of U.S. European Command and NATO’s Supreme Allied Commander Europe, “is taking prudent steps to make sure that if we need to move forces from inside Europe to other places in Europe and allied territory, that he’s ready to do that.”

“We take our NATO commitments seriously and we’re going to be consulting with allies as we have been certainly in coming days,” he said. “If there’s ways in which we can help bolster their capabilities to help their defensive postures, we’re going to take a serious look at that.”

Russian President Vladimir Putin has said he wants NATO to bar Ukraine from membership in the alliance and for the West to withdraw troops and military equipment from countries added to the alliance in the past 25 years, such as Romania and Bulgaria.

The U.S. on Wednesday sent a written response to Russia’s demands, Secretary of State Antony Blinken said. Without specifying its contents, he said the document did not bend to Russia’s central demand to deny Ukraine future entry to NATO.

“We make clear that there are core principles that we are committed to uphold and defend – including Ukraine’s sovereignty and territorial integrity and the right of states to choose their own security arrangements and alliances,” Blinken said.

Kremlin spokesman Dmitry Peskov on Thursday criticized the response: “We can’t say that they took our concerns into account or showed any readiness to take our concerns into consideration,” according to the Russian government-owned Tass news agency.

However, the response also offered room for negotiation, Blinken said Wednesday, including “arms control related to missiles in Europe” and nuclear weapons management.

“We’ve addressed the possibility of reciprocal transparency measures regarding force posture in Ukraine, as well as measures to increase confidence regarding military exercises and maneuvers in Europe,” Blinken said.

Though the U.S. will not bend on Russia’s demands regarding NATO membership, the Biden administration has been willing to negotiate other actions.

For example, the U.S. was open two weeks ago to discussing scaling back the “size and scope” of its military exercise in the region, but Russia was unwilling to make complementary concessions, Kirby has said.

“We’re open to dialogue, we prefer diplomacy, and we’re prepared to move forward where there is the possibility of communication and cooperation if Russia de-escalates its aggression toward Ukraine, stops the inflammatory rhetoric, and approaches discussions about the future of security in Europe in a spirit of reciprocity,” Blinken said.

As Russia steadily increases its troops along the Ukrainian border, it also deployed about 20 warships on Wednesday for what it said are exercises in the Black Sea, which borders Ukraine to the south, according to Russian state media. Kirby on Thursday said the U.S. is watching the naval activity, which also “leads to our concern over Russian intensions here, which … remain opaque.”

“There’s lots of things that we would like to dissuade them from doing, what they clearly have the capability to do … but the United States has been nothing but clear about the importance of Russia not conducting another incursion into Ukraine, and the consequences that would come from that,” he said.

In 2014, Russia invaded Ukraine and annexed its Crimean Peninsula after deadly protests toppled the country’s former pro-Russian government. The White House has said a new Russian invasion into the country could be imminent as NATO watches what Kirby described as a “consistent — not dramatic” increase in Russian forces along Ukraine’s eastern and norther borders.

However, Biden on Tuesday said predicting whether Russia will invade Ukraine is “a little bit like reading tea leaves.”

“Ordinarily, if it were a different leader — the fact that he continues to build forces along Ukraine’s border from Belarus all the way around — you’d say, ‘Well, that means that he is looking like he’s going to do something,’” Biden said. “But then you look at what his past behavior is and what everyone is saying in his team, as well as everyone else, as to what is likely to happen: It all comes down to his decision.”

While little has been said about possible deployment locations, Biden said Tuesday that he has “no intention of putting American forces or NATO forces in Ukraine.” However, he noted the U.S. has a responsibility to reassure its Eastern Europe allies of its commitment to their security.

“In Eastern Europe, there’s reason for concern. [Russian troops are] along the Russian border. They’re on the Belarus border,” Biden told reporters. “So, everyone from Poland on has reason to be concerned about what would happen and what spillover effects could occur.”

Poland is one of four NATO-member countries that flank Ukraine to the west, including Slovakia, Hungary and Romania.

Austin on Wednesday spoke with Polish Minister of National Defense Mariusz Blaszczak about “enhancing deterrence along NATO’s eastern flank, highlighted the importance of maintaining NATO unity and agreed to continue their close cooperation at this critical time,” Kirby said in a statement.

While the Biden administration has not targeted any specific actions that would trigger a deployment, officials have said the U.S. wouldn’t necessarily have to wait for a Russian incursion to deploy to the region.

“I may be moving some of those troops in the nearer term [to Eastern Europe], just because it takes time,” Biden said.

Kirby also said Tuesday that he couldn’t “rule out the possibility” that additional troops beyond the 8,500 already tapped could be placed on high alert to deploy.

“You’ll see a range of capabilities … logistics, sustainment, medical, aviation [and] certainly brigade combat teams — so there’s a ground element,” he said. “But it’s not based on a cap of a number — it’s based on what capabilities we have agreed to contribute to the NATO Response Force.”

“These are combat credible forces. That’s the idea — that’s what the NATO Response Force is all about,” Kirby added.

Though Biden has no plans to send troops into Ukraine, more than 100 Florida National Guard special operators have been in the country since December on an advise-and-assist mission to help train Ukrainian troops.

The Biden administration has also sent the country about $650 million worth of security assistance and equipment in the past year, about $200 million of which was approved in December.

The U.S. on Wednesday delivered part of that package in a 79-ton shipment that included 300 Javelin anti-tank missiles, according to the U.S. embassy in Kyiv, which is the capital of Ukraine. The Pentagon on Tuesday said the $200 million also includes “other anti-armor systems, grenade launchers, munitions, and non-lethal equipment essential to Ukraine’s frontline defenders.”

The Pentagon also plans to supply the Ukrainian air force with navigational systems, according to the Defense Department.

Other NATO members have recently announced upcoming deployments to the region. Denmark, Spain and the Netherlands each plan to send sea and air support to the region, while France “has expressed its readiness to send troops to Romania under NATO command,” according to a NATO statement earlier in the week.

While the 8,500 troops await a decision on whether they will deploy, the USS Harry S. Truman aircraft carrier strike group is participating in a NATO exercise in the Mediterranean Sea until Feb. 4. It marks the first time since the Cold War that a full U.S. carrier group has come under NATO command, the alliance said Monday.

Still, Kirby said the U.S. continues to hope for a diplomatic resolution without an armed conflict as officials do not believe Putin has yet decided whether Russia will invade Ukraine.

“We still think there’s time and space for diplomacy,” he said. “I think obviously that’s the preferred path here to de-escalate in a peaceful, calm way and destabilize without any shots being fired, but we’re watching it every single day.”