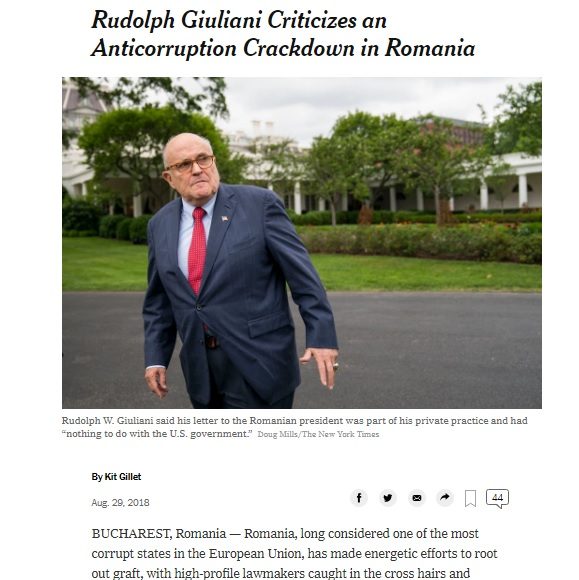 BUCHAREST, Romania — Romania, long considered one of the most corrupt states in the European Union, has made energetic efforts to root out graft, with high-profile lawmakers caught in the cross hairs and concerns about the rule of law prompting rallies attended by tens and sometimes hundreds of thousands of protesters.

The letter, dated Aug. 22, expressed concern about the “continuing damage to the rule of law being done under the guise of effective law enforcement” in Romania. Mr. Giuliani wrote that an amnesty should be given to those who had been convicted in the crackdown, citing the “excesses” of the country’s anticorruption agency.

The letter prompted a raft of comment after it was published in the Romanian news media this week. Its authenticity has not been challenged.

Mr. Giuliani said on Wednesday that despite representing Mr. Trump he was “still an independent lawyer and consultant.” He said the work involving Romania was through his security company, Giuliani Security & Safety, which had been retained by Freeh Group International Solutions, a security company run by Louis J. Freeh, a former director of the F.B.I.

“It has nothing to do with the U.S. government,” Mr. Giuliani said, referring to the Romania letter. “I advise on security, law enforcement and terrorism in many different countries. Private lawyers for the president have all had private practices.”

The Freeh Group did not immediately respond to a request for comment on Wednesday.

Mr. Freeh’s company is known to be representing a Romanian businessman, Gabriel Popoviciu, who was sentenced to seven years in prison in August 2017 in a case centered on a real-estate deal in northern Bucharest.

Criticizing the conviction last year, Mr. Freeh said the decision against Mr. Popoviciu was “not supported by either the facts or the law.”

In a statement to The New York Times in response to questions about the letter, a representative of the United States Embassy in Bucharest, the Romanian capital, said that the government did not comment on the views or conclusions of private American citizens.

The representative also pointed to a June 28 statement issued by the embassy, along with the embassies of 11 other countries, which highlighted Romania’s “considerable progress” in combating corruption and in building an effective rule of law. The statement, which came at a time when contentious alterations to the criminal code were moving through Parliament, also called on all parties involved to “avoid changes that would weaken the rule of law or Romania’s ability to fight crime or corruption.”

Romania, which joined the European Union in 2007, has been praised for its efforts to rein in graft in recent years, a drive that has resulted in thousands of convictions, including of former and current politicians.

However, starting in January 2017, the government pushed through measures that many fear will weaken the rule of law. Critics of the anticorruption drive accuse those involved of using it for political purposes and of relying heavily on the use of court-approved wiretaps, while its defenders say that the effort was under fire because of its success in going after vested interests and powerful individuals.

Last month, Laura Codruta Kovesi, the chief prosecutor of the Romanian National Anticorruption Directorate, was fired after accusations of overstepping her authority and damaging Romania’s image abroad. The tensions have led to major protests, the most recent of which, on Aug. 10, resulted in violent clashes in Bucharest that left more than 400 people wounded.

Mr. Giuliani’s letter was well received by some in Romania. Liviu Dragnea, the leader of the leftist Social Democratic Party, the biggest party in the Romanian Parliament, wrote on Facebook that Mr. Giuliani “puts his finger on the wound.”

Mr. Dragnea was sentenced in June to three-and-a-half years in prisonafter Romania’s highest court found him guilty of abuse of office related to the fictitious hiring of two of his party’s employees at a public institution. He is appealing the verdict. In a separate case in 2015, Mr. Dragnea was convicted of electoral fraud and received a suspended sentence.

“Rudolph Giuliani is a famous federal prosecutor of the United States, who has fought with the mafia and corruption, and whose moral and professional probity commands respect all over the world,” Mr. Dragnea said in a statement, adding that the scrutiny on what he called the “serious violation of human rights and of the principles of the rule of law” was welcome.

Mr. Dragnea’s party has echoed Mr. Trump’s rhetoric about a so-called deep state, prompting some to worry that Romania may be poised to follow the path of the likes of Hungary and Poland toward illiberal democracy.

Dan Barna, the leader of the Save Romania Union, a political party that was founded in 2016 to defend the rule of law and that has become the third-largest in Parliament, suggested Mr. Giuliani had no official status to justify writing the letter.

“I am convinced that President Iohannis is looking forward to the devastating messages that are likely to come from the barber and then from the chef of Donald Trump,” Mr. Barna said.

On Monday, the Foreign Ministry announced that it was summoning George Maior, the Romanian ambassador to the United States, to explain comments in which he had suggested that the letter from Mr. Giuliani was the result of a lobbying campaign by people defending those who have problems with the justice system.

“Ambassador George Maior had a stance that was not approved within the Foreign Ministry or within the government,” a news release said.

Sebastian Burduja, a Romanian entrepreneur and civic leader, published an open letter in one of Romania’s main newspapers, calling for answers from Mr. Giuliani.

He said Mr. Giuliani’s letter was “based on a seriously flawed understanding of the situation in Romania.”