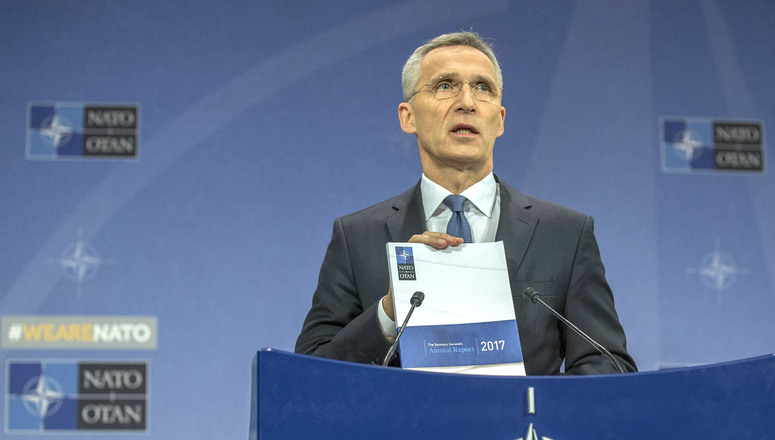 The report shows that, in 2017, European Allies and Canada increased spending on defence by almost 5% – meaning­ there have now been three consecutive years of growth since 2014.

Allies have also made progress on investing in new capabilities. In 2017, twenty-six Allies spent more in real terms on major equipment than the year before.

“All NATO members have pledged to continue to increase defence spending in real terms. The majority have already put in place plans on how to meet the 2% guideline by 2024. And we expect others to follow”, the Secretary General said.

The Report also shows that NATO Allies are contributing more to operations and missions. At the end of 2017, there were over 23,000 troops serving in NATO deployments, up from just under 18,000 in 2014, before Russia’s illegal annexation of Crimea and the rise of ISIS. “This is an increase of around 30%”, the Secretary General said.

Commenting on NATO’s Resolute Support training mission in Afghanistan, the Secretary General said that with the Alliance’s assistance, Afghan forces had increased military pressure on the Taliban in 2017, ensuring that they did not achieve their strategic objective of capturing a provincial capital.

“We strongly support an Afghan-led, Afghan-owned peace and reconciliation process. I commend President Ghani for his courageous leadership. His offer to the Taliban is the clearest invitation to peace yet. So I call on the Taliban to come to the negotiating table. There is an opportunity now to end the conflict”, he said.

The Secretary General also addressed the recent use of a nerve agent in the United Kingdom, noting that this was “the first offensive use of a nerve agent on Alliance territory since NATO’s foundation”. “All Allies agree that the attack was a clear breach of international norms and agreements,” and they have “called on Russia to address the UK’s questions”, he said.

He said that the backdrop to the attack was “a reckless pattern of Russian behaviour over many years”. This behaviour includes “the illegal annexation of Crimea and military support to separatists in Eastern Ukraine. The military presence in Moldova and Georgia against these countries’ will. Meddling in Montenegro and elsewhere in the Western Balkans. Attempts to subvert democratic elections and institutions. And the military build-up from the North of Europe to the Middle East.” He also warned that the “blurring of the line” between nuclear and conventional warfare “lowers the threshold for Russia’s use of nuclear weapons”.

Mr Stoltenberg explained that NATO’s approach to Russia “remains firm, defensive and proportionate” and that “NATO will not mirror Russia tank for tank, missile for missile or drone for drone.” He also said that the Alliance would continue to seek meaningful dialogue with Russia which, while “difficult”, was “vital to increase transparency and to reduce risk”.