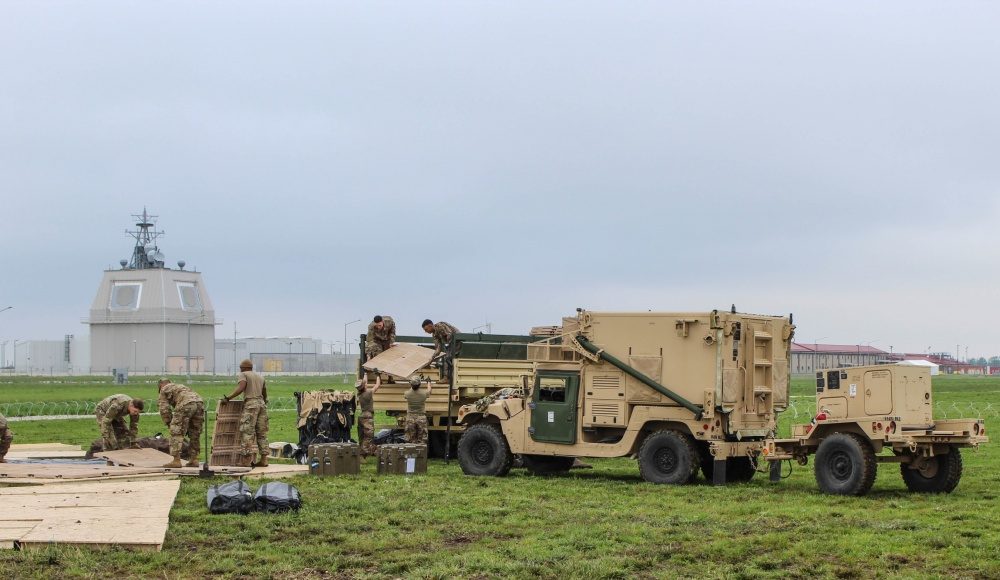 At the request of NATO, the U.S. Secretary of Defense deployed the B-62 (THAAD) personnel and equipment from Fort Hood, more than 6,000 miles away, to begin the summer mission here. The U.S. Air Force, Army and Navy played a critical role in supporting the deployment, planned by the 10th Army Air and Missile Defense Command and Task Force Buckeyes, the Ohio Army National Guard’s 174th Air Defense Artillery Brigade from Columbus, Ohio, currently deployed to Europe as 10 AAMDC’s Mission Command Element.

“We are supporting the Aegis Ashore and the commitment of forces to NATO and the ongoing phased approach to missile defense in the Army,“ St. John said. “Some long term implications we now know are that THAAD can integrate into a NATO environment and rapidly employ joint air missile defense operations while the Aegis Ashore system will be upgraded.”

St. John, a native of Logan, Utah, said the unit received the THAAD equipment a little over a year ago and went straight into gunnery certifications. After the certification, the unit began training at White Sands, New Mexico, before being notified about the upcoming deployment to Romania.

“As soon as we were notified about this mission our equipment was still at the last exercise and not at home station and so, to transport it, recover and put it back on the boat and then deploy forward was a huge process,” he said. “Soldiers had been gone away from their families for weeks, came home for a few weeks and then got right back out the door. The ability and the effort from the soldiers and their willingness to serve were incredible.“

Another first for the unit was planning the complicated movement of thousands of pounds of equipment valued at over a billion dollars from Texas to Romania with no past blueprint to reference.

“This was the first deployment of THAAD out of Fort Hood, so that was a new process working with our transportation offices to make sure that they understand the requirements moving forward in the future and they were great to work with,” he said.

U.S. Army 1st Sgt. Travis Washington, B-62 (THAAD) first sergeant, said that the mission was a great opportunity for soldiers to work with the Navy, and other agencies, integrating two different systems.

“The long-term goal is to build a better relationship with NATO parties when it comes to air defense as a whole to make the branch better,” Washington, a native of Augusta, Ga. said. “I’m just glad my soldiers are able to experience this type of mission and be a part of NATO and represent 69th brigade and 32nd Air Defense as a whole.”

The arrival of Army soldiers to the Navy base, which has been operational since 2015, took a lot of hard work and coordination.

U.S. Navy Capt. Jackie Knick, commander of Naval Support Facility Deveselu, said he has not worked with Army soldiers before, but despite learning the learning curve for the Army’s affinity for acronyms, the mission has been smooth.

“One of my biggest concerns was to make sure the facilities here were ready for [the incoming soldiers] and then logistically trying to get everything in here at Deveselu,” Knick said. “I’ve seen a laundry list of things coming from Texas, Alabama and other places. It actually went pretty easily from my standpoint.”

In order to support the Army’s mission, the Navy is working to ensure everyone stays on the agreed timeline and the Aegis Ashore project proceeds as planned.

“The sooner we get completed, the sooner the Army can get out of here and move on to whatever tasking comes next,” Knick said.

Knick said that a big key is getting everything in place and operational to support the additional manpower on the small facility located within the Romanian 99th Military Base, near the city Caracal in southwest portion of the county. With a strong partnership intact between the Romanians and the U.S. Navy, bringing Army soldiers into the mix required some additional logistical support that was overseen by Romanian Col. Răzvan Brătulescu, 99th Military Base commander.

Brătulescu says he’s gone through this process before with the arrival of the U.S. Navy several years ago and he wants to make sure everyone feels welcome here on base.

“I know how difficult it is to be away from home,” Brătulescu said. “I will do my best to make sure everyone feels welcome as long as they are here. This base is pretty large, so we can accommodate much more people than we already are now.”

Brătulescu said that working with the U.S. military has been really great and the level of cooperation is incredible due to the professionalism of all involved. He added that he’d like to see the soldiers get involved in community events alongside the Navy.

“We have open communications with local institutions in the county to make sure that the [service members] are well treated by the local population,” he said. “We usually participate together in community events organized by us and the local community. We try to integrate them into the local communities.”

The Aegis Ashore is a key element of NATO Ballistic Missile Defense, which protects Europe from ballistic missile threats outside the European theater. The scheduled update to Aegis Ashore Romanian is part of regular updates taking place on all U.S. Aegis systems.