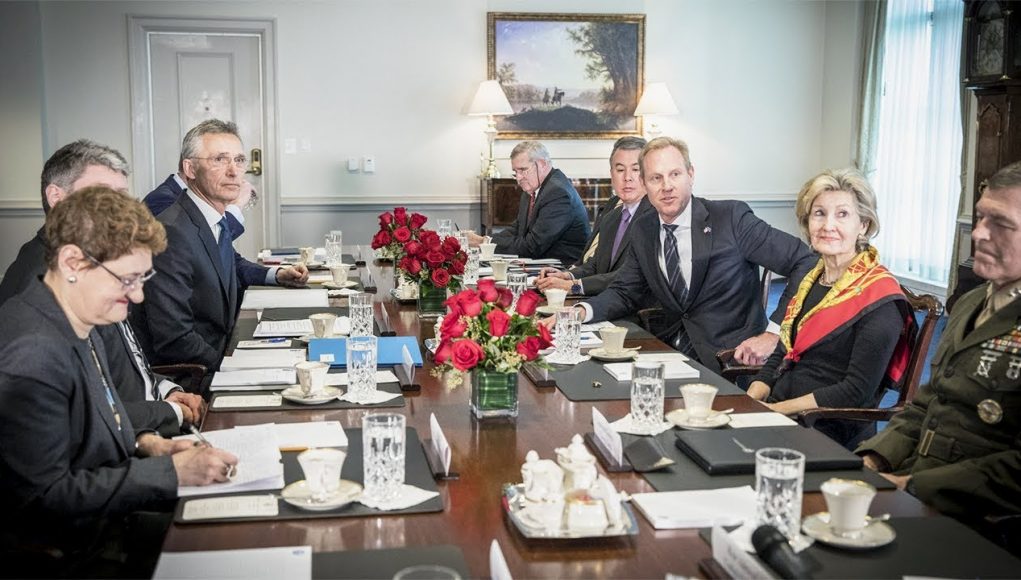 ACTING SECRETARY OF DEFENSE PATRICK SHANAHAN:  OK, everybody in a good spot?  Fantastic.  Well good morning.  I think we’re going to have a very good dialogue this morning, Mr. Secretary.  Ambassador Hutchison, it’s always great to have you here in the Pentagon.  And maybe before I make any comments, I just want to say you’re everywhere. (Laughter.)

I saw you on TV at Davos.  I turned on the TV yesterday and, you know, you’re on the TV, you’re on Twitter, so I feel very honored to have you here in the — in the Pentagon, and I thought very early on wanted to have this opportunity to spend some time with you and make sure that we do the proper preparation and planning for the February ministerial.

But I — you know, one of the things I wanted to, you know, be clear to communicate is NATO ensures trans-Atlantic security.  And as President Trump said — and this was just 11 days ago here in the Pentagon, where he said, we are going to be with NATO 100 percent.  That includes our Article 5 collective defense guarantee, and as I shared with you the other day, we greatly appreciate your extended service.  We know what a stabilizing, strong role you play in NATO, and maybe we can talk you into staying a little bit longer if we’re lucky.

Under your leadership — (Laughter) — right?

So — but you know, when you look at the contributions since 2017 to Afghanistan, it has increased 12 percent.  It’s the highest levels of contribution in the history of the mission.  And when we consider your work on equitable burden sharing within our alliance, we see a remarkable progress.

And as you have noted, this is how NATO does its calculations, since President Trump took office, America’s NATO allies have stepped up defense spending by a total of $41 billion.  Allied defense spending increased by more than nine percent from 2016 to 2018; the largest increase in a quarter century.

By 2020, our NATO allies are projected to have increased defense spending by approximately $100 billion.  Our recent funding increases let us bolster deterrence and defense through larger and more frequent exercises, mobility and infrastructure improvements and a re-vamped NATO response force and command structure.

And this has allowed us to increase our force presence on the territory of our most vulnerable allies.  A few years ago, achieving these improvements and funds might have seemed impossible.  A few years from now, we will write the same success story on readiness.

I’m encouraged that we’re moving forward on our readiness initiative.  Thirty ground battalions, 30 air squadrons, 30 warships, ready to fight in 30 days or less.  Now we know our work here is only just beginning.  We recognize a need to move from theory to practice, and from practice to results.

Now, results come from real changes to posture.  The international security environment that necessitates these changes is stark.  Among a host of egregious actions, Russia continues to choose to violate the INF treaty.

NATO is the most successful and most powerful military alliance in human history.  We do not forget it and we will maintain our commitment to transatlantic security and unity.  Mr. Secretary General, to close, I note this year marks NATO’s 70th anniversary.

There’s a practical reality worth reflecting on.  Every day, thousands of NATO soldiers and civilians work together with unparalleled cohesion.  That work, 70 years worth, has resulted in political unity and military interoperability.

I know that this will keep us strong as we move forward together.  I look forward to strengthening our alliance further at February’s ministerial.  I appreciate you making time out of your busy TV schedule to be with us — (Laughter.) — here at the Pentagon today, and I invite your opening comments.

SECRETARY GENERAL JENS STOLTENBERG:  Secretary Shanahan — Patrick, thank you so much for these warm words and the warm welcome.  I really appreciate this opportunity to meet with you so early in your tenure and your background, your experience from the defense industry, from here at the Pentagon and your personal commitment to the alliance are of great value for NATO.

And I really look forward to welcoming you to the NATO Defense Ministerial in — in Brussels next month, and I know that all the Allied Ministers also look very much forward to seeing you there.

As you just noted, NATO is really making a lot of progress in many different areas, high readiness of our forces, stepping up the fight against terrorism and also investing more in defense burden sharing.

For the first time in our history, we have combat-ready troops in the eastern part of the alliance, with the four battle groups.  We are conducting, changing the command structure with a new command in Norfolk, Virginia, but also new elements in — in Europe.

And we are stepping up our fight against terrorism with a new training mission in Iraq.  The main purpose is to make sure that the Iraqis are able to stabilize their own country and make sure that ISIS doesn’t re-emerge in Iraq.

Then, we continue to stay with the United States in Afghanistan.  We welcome the talks with Taliban.  Ambassador Khalilzad briefed all allies a few weeks ago, and the reason why NATO is in Afghanistan is to create a condition for (inaudible) peaceful solution to make sure that Afghanistan never again becomes a safe haven for international terrorists and to send a message to Taliban that they will not win on the battlefield, so they have to sit down at the negotiating table, and therefore we are encouraged by what we see now, the progress and — and talks with Taliban.

So we see that the carried message from President Trump is having a — a real impact.  So we have done a lot.  We have much more to do, and I really look forward to working closely with you in addressing all of these challenges.

So thank you for having me and I look forward to working with you in Brussels.

Q:  Secretary Stoltenberg, if I may.  Do the peace talks include the withdrawal of NATO troops, and if not, what percentage of NATO troops do you anticipate staying in Afghanistan?

SEC. GEN. STOLTENBERG:  As we have said many, many, many times, we are in Afghanistan to create the conditions for a peaceful, negotiated solution.  We are there to train and assist and advise the Afghan soldiers so they can take care of security and stability in Afghanistan themselves.

We will not stay longer than necessary, but we will not leave before we have a situation which enables to leave or at reduce the number of troops without jeopardizing the main goal of our presence, and that is to prevent Afghanistan from becoming a safe haven for international terrorists once again.

I think it’s a bit too early to speculate, because what we have to do now is to support the efforts to try to find a peaceful solution.  We strongly support those efforts.  Ambassador Khalilzad briefed all allies recently.  We are in close contact with the United States.  One of the issues we will discuss of course today is the peace efforts.

But again, our military presence, the purpose of that is to create the conditions for a political solution, and we hope that we are able to achieve that.

Q:  Mr. Secretary?  Secretary Shanahan, if I could ask — the president said all military options are on the table for Venezuela.  What does that mean for planning here at the Department of Defense?

SEC. SHANAHAN:  In the Department of Defense here, we’re very closely monitoring the situation in Venezuela.

Q:  Are there military options?

SEC. SHANAHAN:  Thank — thank you, everybody.  We appreciate you spending time here with us.  All right, see you.  Thank you.