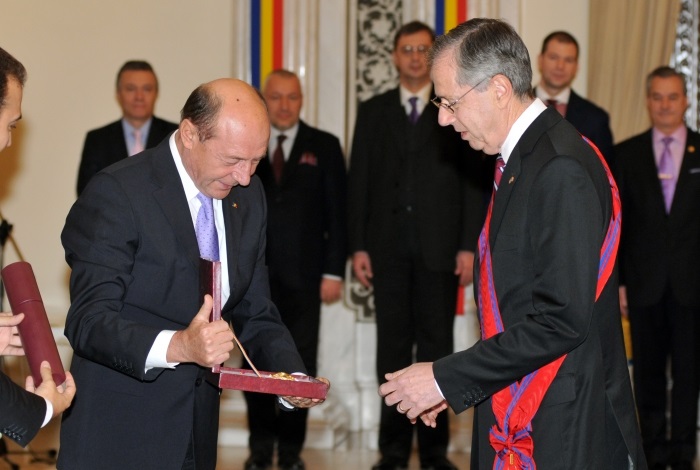 During your first year as a US ambassador to Romania, we had an interesting conversation about the fundamental values of the Strategic Partnership between Romania and the US. Especially on defense and security matters. We had together a live program in 2010 from MK Air Base on Romanian Air Force Day, appreciating F-16 evolutions. I knew that Lockheed Martin products are one of your favorites even before your posting to Bucharest.

What happened in this span of time was  you choosing  to become more than a US ambassador to Romania: despite all rules of diplomacy, you turned into a close friend of Traian Basescu, , a partisan representative of State Department in Bucharest.  The legacy of your term as an ambassador to Bucharest is a schoolbook lesson about how not to behave when carrying out such an important mission. You did what an ambassador must never do: mixing political and financial interests, choosing sides si in Romanian politics and teaming up with these people and their abhorrent behavior in ignoring the will of the people.

I saw that after your term as an ambassador in Romania ended that you had a nice and well paid job at Fondul Proprietatea. It is sheer luck to have such an opportunity especially during the economic crisis. Anyway, congratulations!

I have some questions for you:  how do you feel when you see so many corrupt and suspect politicians close to Basescu in his time are now detained or arrested? Are you comfortable with the partisanship you had with them? I saw many good reactions from US Embassy and US administration in DC about corruption in Romania when all the political competitors of Basescu were arrested. Why is this silence from your side when files like Microsoft exploded in Bucharest? It was the same in the case of the arrest of the brother of the president for bribe and influencing justice. Any comment from you about the sentencing to 4 years in prison of your former employer Dan Adamescu?

Hoping that you can convince your friends and colleagues that corruption is no stranger to those you have supported in Romania, I wish you all the best.
Radu Tudor
Defense and political analyst
Antena 3 Tv, Romania