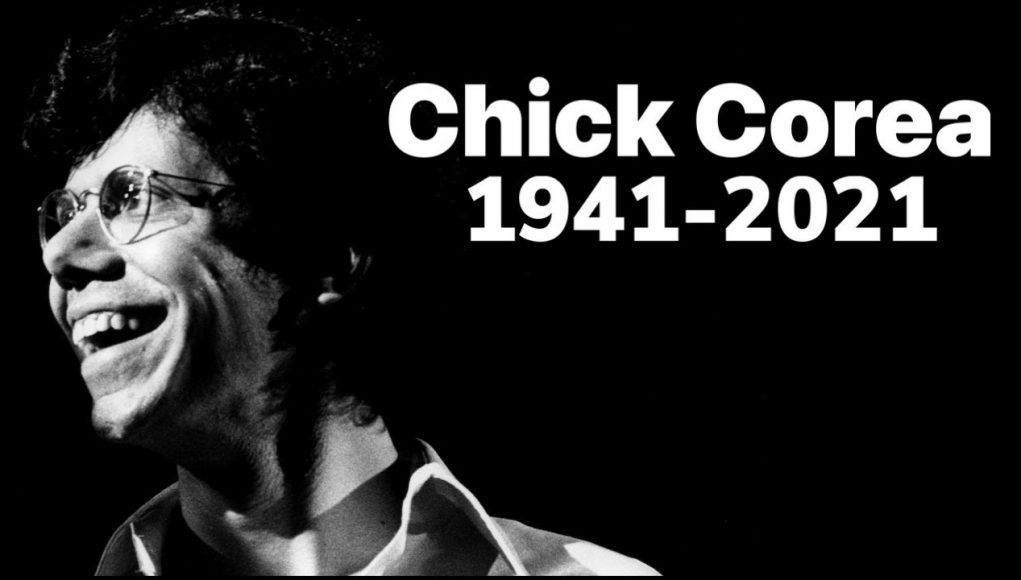 (June 12, 1941 – February 9, 2021) was an American jazz composer, keyboardist, bandleader and occasional percussionist.[3] His compositions “Spain“, “500 Miles High“, “La Fiesta”, “Armando’s Rhumba” and “Windows” are widely considered jazz standards.[4] As a member of Miles Davis‘s band in the late 1960s, he participated in the birth of jazz fusion. In the 1970s he formed Return to Forever.[3] Along with Herbie Hancock, McCoy Tyner, Keith Jarrett and Bill Evans, he is considered one of the major piano players to emerge in jazz during the post-John Coltrane era.[5]

Corea continued to pursue multiple collaborations and to explore different musical styles throughout the 1980s and 1990s. He was also known for promoting and fundraising for a number of social issues.[6]

Corea won 23 Grammy Awards and was nominated over 60 times.

Armando Corea was born in Chelsea, Massachusetts, to parents Anna and Armando J. Corea.[citation needed] He was of southern Italian descent, his father having been born to an immigrant from Catanzaro, Calabria.[8][9] His father, a jazz trumpeter who led a Dixieland band in Boston in the 1930s and 1940s, introduced him to the piano at the age of four. Surrounded by jazz, he was influenced at an early age by bebop and Dizzy Gillespie, Charlie Parker, Bud Powell, Horace Silver, and Lester Young. When he was eight, he took up drums, which would influence his use of the piano as a percussion instrument.

Corea developed his piano skills by exploring music on his own. A notable influence was concert pianist Salvatore Sullo, from whom Corea started taking lessons at age eight and who introduced him to classical music, helping spark his interest in musical composition. He also spent several years as a performer and soloist for the St. Rose Scarlet Lancers, a drum and bugle corps based in Chelsea.

Given a black tuxedo by his father, he started playing gigs when in high school. He enjoyed listening to Herb Pomeroy‘s band at the time and had a trio that played Horace Silver’s music at a local jazz club. He moved to New York City, where he studied musical education for one month at Columbia University and six months at the Juilliard School. He quit after finding both disappointing, but remained in New York City.

In live performance he frequently processed the output of his electric piano with a device called a ring modulator. Using this style, he appeared on multiple Davis albums, including Black Beauty: Live at the Fillmore West and Miles Davis at Fillmore: Live at the Fillmore East. His live performances with the Davis band continued into 1970, with the final touring band he was part of consisting of saxophonist Steve Grossman, electric organist Keith Jarrett, bassist Dave Holland, percussionist Airto Moreira, drummer Jack DeJohnette, and, of course, Davis on trumpet.[3]

Holland and Corea departed the Davis band at the same time to form their own free jazz group, Circle, also featuring multi-reed player Anthony Braxton and drummer Barry Altschul. This band was active from 1970 to 1971, and recorded on Blue Note and ECM. Aside from exploring an atonal style, Corea sometimes reached into the body of the piano and plucked the strings. In 1971, Corea decided to work in a solo context, recording the sessions that became Piano Improvisations Vol. 1 and Piano Improvisations Vol. 2 for ECM in April of that year.

Named after their eponymous 1972 album, Corea’s Return to Forever band relied on both acoustic and electronic instrumentation and initially drew upon Latin American music styles more than rock music. On their first two records, Return to Forever consisted of Flora Purim on vocals and percussion, Joe Farrell on flute and soprano saxophone, Airto Moreira on drums and percussion, and Stanley Clarke on acoustic double bass.[3] Drummer Lenny White and guitarist Bill Connors later joined Corea and Clarke to form a second version of the group, which blended the earlier Latin music elements with rock and funk-oriented sounds partially inspired by the Mahavishnu Orchestra, led by his Bitches Brew bandmate John McLaughlin. This incarnation of the group recorded the album Hymn of the Seventh Galaxy, before Connors’ replacement by Al Di Meola, who was present on the subsequent Where Have I Known You Before, No Mystery, and Romantic Warrior.

In the 1970s Corea started working with vibraphonist Gary Burton, with whom he recorded several duet albums for ECM, including 1972’s Crystal Silence. They reunited in 2006 for a concert tour. A new record called The New Crystal Silence was issued in 2008 and won a Grammy Award in 2009. The package includes a disc of duets and another disc with the Sydney Symphony Orchestra.

Toward the end of the 1970s, Corea embarked on a series of concerts with fellow pianist Herbie Hancock. These concerts were presented in elegant settings with both artists dressed formally and performing on concert grand pianos. The two played each other’s compositions, as well as pieces by other composers such as Béla Bartók, and duets. In 1982, Corea performed The Meeting, a live duet with the classical pianist Friedrich Gulda.

In December 2007 Corea recorded a duet album, The Enchantment, with banjoist Béla Fleck.[11] Fleck and Corea toured extensively for the album in 2007. Fleck was nominated in the Best Instrumental Composition category at the 49th Grammy Awards for the track “Spectacle”.[12]

In 2008 Corea collaborated with Japanese pianist Hiromi Uehara on the live album Duet (Chick Corea and Hiromi). The duo played a concert at Tokyo’s Budokan arena on April 30.[13]

In 2015 he reprised the duet concert series with Hancock, again sticking to a dueling-piano format, though both now integrated synthesizers into their repertoire. The first concert in this series was at the Paramount Theatre in Seattle and included improvisations, compositions by the duo, and standards by other composers.

Corea’s other bands include the Chick Corea Elektric Band, its trio reduction called “Akoustic Band”, Origin, and its trio reduction called the New Trio. Corea signed a record deal with GRP Records in 1986 which led to the release of ten albums between 1986 and 1994, seven with the Elektric Band, two with the Akoustic Band, and a solo album, Expressions.

The Akoustic Band released a self-titled album in 1989 and a live follow-up, Alive in 1991, both featuring John Patitucci on bass and Dave Weckl on drums. It marked a return to traditional jazz trio instrumentation in Corea’s career, and the bulk of his subsequent recordings have featured acoustic piano. The Akoustic Band has toured intermittently since 1986.[15][16][17][18] They provided the music for the 1986 Pixar short Luxo Jr. with their song “The Game Maker”.

In 2001, the Chick Corea New Trio, with bassist Avishai Cohen and drummer Jeff Ballard, released the album Past, Present & Futures. The eleven-song album includes only one standard (Fats Waller‘s “Jitterbug Waltz“). The rest of the tunes are Corea originals. He participated in 1998’s Like Minds with old associates Gary Burton on vibraphone, Dave Holland on bass, Roy Haynes on drums, and Pat Metheny on guitars.

During the latter part of his career, Corea also explored contemporary classical music. He composed his first piano concerto – and an adaptation of his signature piece, “Spain”, for a full symphony orchestra – and performed it in 1999 with the London Philharmonic Orchestra. Five years later he composed his first work without keyboards: his String Quartet No. 1 was written for the Orion String Quartet and performed by them at 2004’s Summerfest in Wisconsin.

Corea continued recording fusion albums such as To the Stars (2004) and Ultimate Adventure (2006). The latter won the Grammy Award for Best Jazz Instrumental Album, Individual or Group.

In 2008, the third version of Return to Forever (Corea, Stanley Clarke, Lenny White and Al Di Meola) reunited for a worldwide tour. The reunion received positive reviews from jazz and mainstream publications.[19] Most of the group’s studio recordings were re-released on the compilation Return to Forever: The Anthology to coincide with the tour. A concert DVD recorded during their performance at the Montreux Jazz Festival was released in May 2009. He also worked on a collaboration CD with the vocal group The Manhattan Transfer.

A new group, the Five Peace Band, began a world tour in October 2008. Corea had worked with McLaughlin in Davis’s late 1960s bands, including the group that recorded Davis’s classic album Bitches Brew. Joining Corea and McLaughlin were saxophonist Kenny Garrett and bassist Christian McBride. Drummer Vinnie Colaiuta played with the band in Europe and on select North American dates; Brian Blade played all dates in Asia and Australia, and most dates in North America. The vast reach of Corea’s music was celebrated in a 2011 retrospective with Corea guesting with the Jazz at Lincoln Center Orchestra in the Lincoln Center for the Performing Arts; a New York Times reviewer had high praise for the occasion: “Mr. Corea was masterly with the other musicians, absorbing the rhythm and feeding the soloists. It sounded like a band, and Mr. Corea had no need to dominate; his authority was clear without raising volume.

Corea celebrated his 75th birthday in 2016 by playing with more than 20 different groups during a six-week stand at the Blue Note Jazz Club in Greenwich Village, New York City. “I pretty well ignore the numbers that make up ‘age’. It seems to be the best way to go. I have always just concentrated on having the most fun I can with the adventure of music.