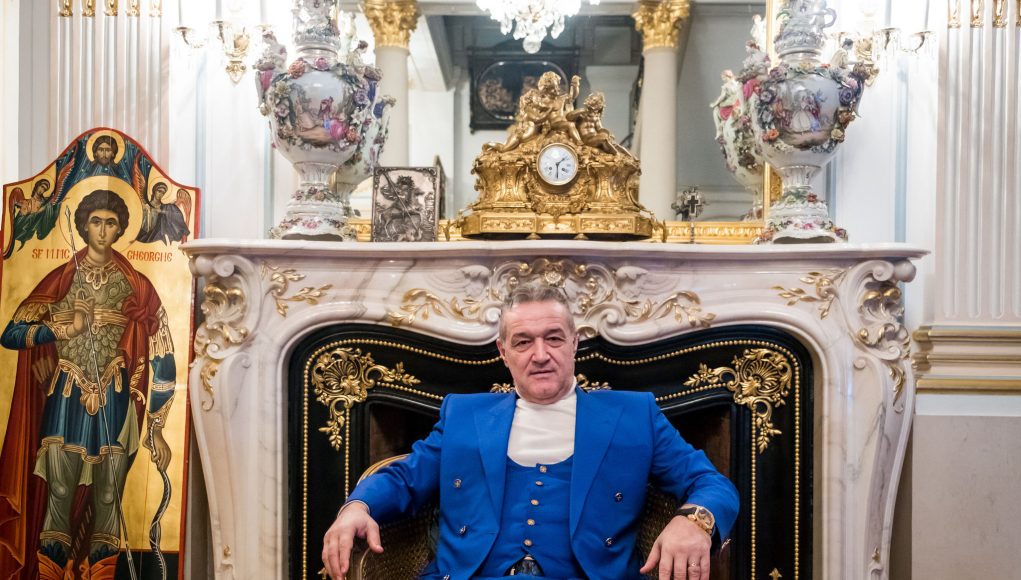 BUCHAREST, Romania — For once, the crowds that had gathered to shout and to denounce were not angry at Gigi Becali.

In recent years, Becali, the owner of F.C. Steaua Bucharest, Romania’s most popular and successful soccer team, had become used to being vilified. And not just because he is one of the country’s richest and most controversial characters, one who regularly makes headlines for his negative opinions on women and gays. Since 2011, Becali has also been in a legal battle for control of Steaua — which won the 1986 European Cup, the precursor to UEFA’s Champions League — with a formidable adversary: the club’s former owner, the Ministry of Defense.

It is a dispute that threatens to destroy one of Europe’s best-known teams. It has divided the club’s fans, with the majority boycotting while Becali remains in charge. It has seen Becali lose the rights to the club’s badge and even its name. It has also led to the creation of a new army team, CSA Steaua Bucharest, which is likely to begin play next season in Romania’s fourth division.

Yet over the last few months, as tens of thousands of protesters braved biting winter nights to gather in Piata Victoriei — Victory Square — to demand an end to corruption in public life here, Becali for once was not the target of their ire. In fact, he joined the crowds.

“It was a sign of solidarity,” he said, sitting in a high-ceilinged reception room in his palace, which lies only yards from Victory Square. Becali, dressed in a maroon suit and black shirt, was surrounded in a halo of gold leaf. An icon of St. George, his patron saint, hung nearby. A self-portrait leaned against the wall by the door.

“I wanted to show that I am loved by the people,” he explained, saying, “I think I am the only public person who could go there without an escort or bodyguards.”

It was an odd picture to paint, the much-maligned millionaire as a man of the people. But hardly more so than the reality: a great European soccer club in a battle for its name, and perhaps even its existence, while its owner wages a one-man war against the Romanian Army.

A Team’s Proud Past

The battle for Steaua Bucharest is a complex tale of greed, money and, quite possibly, revenge. Steaua Bucharest was formed in 1947 and, like many sports teams in Eastern Europe under communism, it was owned and run by a government department. For decades, the team was seen as representing the army, while its biggest rival, Dinamo, represented Romania’s Ministry for Internal Affairs.

When Steaua Bucharest beat Barcelona on penalties to lift the European Cup in 1986, Romania was still under the control of the communist dictator Nicolae Ceausescu. The team would go on to reach the European Cup semifinals in 1988, and it returned to the final a year later. After the fall of communism, however, state ownership of teams became unfashionable, and Steaua was spun away from the army sports association, CSA Steaua Bucharest, in 1998.

At that point, Becali, a former shepherd who made a fortune in real estate after the fall of communism, gradually increased his influence, and in 2003 he seized control of Steaua.

“I became rich, and when a man becomes rich, he wants to become famous,” Becali said. “That is why I took over at Steaua. And I became famous.”

For many in this country, Becali, 58, represents a Romania that should have been left in the past. He calls himself an anti-globalization nationalist and has been compared with Donald J. Trump, whom he admires. (“I said that if Trump can become president, God will cancel the apocalypse,” Becali said.) After a career as a politician in both the Romanian and European Parliaments — and a failed run for Romania’s presidency — Becali landed in prison in 2013 after a land swap deal he struck with the army. When he was released, the legal battle for Steaua was already underway.

Under Becali’s ownership, Steaua had been a success, winning five league titles and a handful of domestic cups and regularly appearing in the Champions League, a significant source of revenue. But Becali also has alienated fans and others around the club, including supporters within the army, with his outbursts at club legends and the wider population.

Shortly after the club’s first Champions League group stage qualification in 2006 — and a few months after it reached the semifinals of the UEFA Cup, now known as the Europa League — the army began to take a closer look at the deal that allowed Becali to buy the club. It claimed serious irregularities had taken place. The army’s lawyer charged that some documents were faked, an accusation Becali strenuously denies.

In 2011, a complex series of legal actions began, challenging the sale and the use of the club’s colors and brand. At first, the machinations took place largely under the radar. But the struggle burst into public view in December 2014 when a Romanian court ruled that Becali did not have the right to use the Steaua crest and other symbols related to the club.

Unsure how to apply the decision, the club changed its traditional red and blue colors and removed the Steaua badge from its players’ jerseys, the bench and even the scoreboard before the next home match. At one point last year Becali even threatened to name the club after himself.

He quickly walked that back, acknowledging it would alienate the fans. But amid the confusion and acrimony, attendance collapsed. A separate case is pending to decide whether Becali will have to pay tens of millions of dollars in compensation, and a final appeal has yet to determine if Becali can use the name Steaua Bucharest. For now, the team has introduced a new crest and registered itself with UEFA under a new name to ensure it can play in European competition.

“The name is not that important,” Becali said. He quoted a recent online poll that said 85 percent of fans believe his club, whatever it is called, is the true Steaua.

Across the city, opposite a new shopping mall, CSA Steaua Bucharest’s revived soccer team is taking shape inside an army base.

“There wasn’t an exact moment when we decided to get the brand back,” said Col. Cristian Petrea, the president of CSA Steaua. Petrea is a bear of a man, dressed in a smart blue suit with a strict military haircut. “It was a matter of analysis. We made a decision to protect the Steaua brand. This legal action began after a strong overview of the documents.”

At first, it was thought that the new Steaua might be able to replace F.C. Steaua in Romania’s first division. But while Petrea said he insisted on a clean start, there are links, real and sentimental, to Steaua’s glory days.

The club’s famed, crumbling Ghencea stadium — where many of Steaua’s European Cup highlights in the 1980s took place, and which Becali departed in 2015 for the new national stadium — is being renovated with 60 million euros (about $65 million) of state money ahead of the 2020 European Championships. The club’s trophies are all under lock and key, Petrea said, including a miniature replica of the European Cup. One of Steaua’s players from that team, Marius Lacatus, has been installed as the new team’s sporting director.

“I never wanted a conflict between my colleagues,” Lacatus said, trying to stay above the legal fray.

Helmuth Duckadam, the goalkeeper who saved four penalty kicks against Barcelona, has backed Becali’s club. And while Gheorghe Hagi, another Steaua legend and perhaps Romania’s greatest player, hosted Becali at his soccer academy when he was given day release from prison, he has officially stayed neutral in the current dispute.

“Friendships are built in years and years, and I don’t want to ruin friendships because of this,” Lacatus said.

Get the big sports news, highlights and analysis from Times journalists, delivered to your inbox every week.

Lacatus is understandably wary. He has had several run-ins with Becali, who hired him as Steaua coach — and later fired him — three times.

CSA Steaua Bucharest officials denied that the legal case over the club’s brands, or the decision to create a competing Steaua, had anything to do with revenge, or that either came about to punish Becali.

“We don’t look at Becali like he is our enemy,” Petrea said. “We have our club. He has his club.”

Still, many of Steaua Bucharest’s fans, including the biggest group of ultras, have decided to abandon Becali’s team and support the army team. Those ultras contend that Becali does not value them or the team, only money. A smaller group continues to support Becali’s club, if not Becali himself.

“We do not support Gigi Becali — we support this team,” said one who gave his name as Cosmin, but declined to provide his last name. “Gigi made a lot of good things in Romanian football, but he has a big mouth and he said a lot of stupids about our icons, about our legends.”

The fans who say they will stick with the old Steaua also cite practical reasons. Corruption, a collapse in attendance and financial problems have led a number of clubs to go out of business, and some fear that if Steaua falters, it may take down Romanian soccer with it.

“I’ll never support that team,” Cosmin said of the army’s team. “If this Steaua disappears, football from Romania disappears for me. This is the end of the story.”

Thick snow lay outside Romania’s national stadium. It was match day in February, and Becali’s Steaua Bucharest was playing F.C. Voluntari. It was 10 degrees and Becali was wearing a black overcoat with a fur collar, an electric blue turtleneck and a porkpie hat. “I don’t feel the cold,” he said as he left his private box to sit outside and watch the match.

A few hundred fans were inside the cavernous, empty stadium. The only noise came from perhaps a dozen of them, including Cosmin and his small band of ultras, and others who had decided to look past the current disputes and stand by the team.

“I don’t feel the same joy as I watch football, as I am not the same person I used to be,” Becali had said earlier, eager to paint himself as a deeply religious man, changed by his stint in prison, concerned with bigger things.

Still, with the match over, Becali was quickly out of his seat, watching a replay of one of the penalty decisions on a television. He stormed out of the near-empty stadium in disgust and headed back to where that night’s biggest crowd had gathered, around his golden palace, chanting against corruption.

A few weeks later, Becali’s executives announced the club’s new name: F.C. FCSB. Perhaps the switch was yet another legal maneuver, or maybe an attempt to defuse the fight with the army, but the effect is clear. For a few months, maybe more, the celebrated name of Steaua Bucharest will simply vanish.