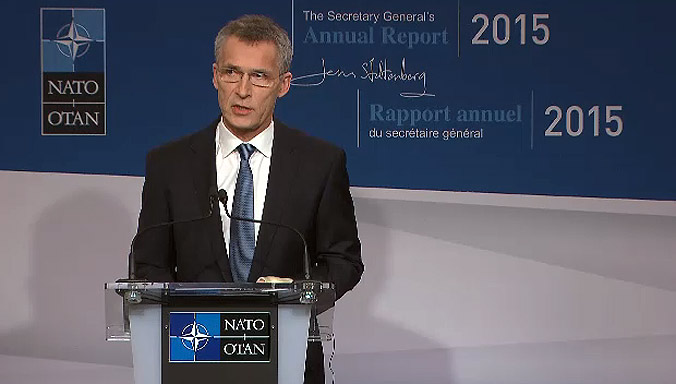 Here are some paragraphs :

We also saw significant progress with NATO’s ballistic missile defence system, including two more Aegis ships based in Spain and progress towards the activation of the Aegis Ashore facility in Romania.

(…)
2015 assurance measures included: – an increased number of fighter jets on airpolicing patrols over the Baltic States, and deployed fighter jets to Poland and Romania – Airborne Early Warning and Control surveillance flights over the territory of NATO’s eastern Allies, and maritime patrol aircraft flights along NATO’s eastern borders
(…)
HQ Multinational Division Southeast
• Role: collective defence focus in the southeast of NATO’s area of responsibility; command and control option for the NRF land forces deployed in this area and command and control of the two NFIUs in its area • Location: Bucharest, Romania • Composition: Lead nation: Romania – NATO Force Integration Units • Role: to improve cooperation and coordination between NATO and national forces, and prepare and support exercises and any deployments needed • Location:  ◦ Activated in 2015: Bulgaria, Estonia, Latvia, Lithuania, Poland and Romania
(…)
Since the agreement to extend NATO’s ballistic missile defence in 2010, significant progress has been made to ensure that the capabilities and systems that comprise NATO’s BMD are properly aligned and that the mechanisms for command and control are fully operational. In 2015, achievements include: – Two US BMD-capable Aegis ships, the USS Carney and the USS Porter, arrived at their home port in Spain – these are in addition to two (USS Donald Cook and USS Ross) that arrived in Rota in 2014. – The construction of  the US Aegis ashore site in Romania was completed. – Technical infrastructure and command and control arrangements have been enhanced. – Several Allies are contributing to the system with their own assets. – A number of Allies took important national decisions on acquiring BMD assets that might be offered to NATO: • Poland announced a plan to acquire Patriot batteries to support its ground-based air and missile defence. • Germany announced its intention to acquire MEADS systems to do the same. • Denmark and the Netherlands continued upgrades to their sea-based sensors for missile defence. • Turkey cancelled the tender for a ground-based air and missile defence system from abroad and decided to develop it indigenously.

FROM RUSSIA, WITH COLD